The beginnings of the Veeh-Harfe 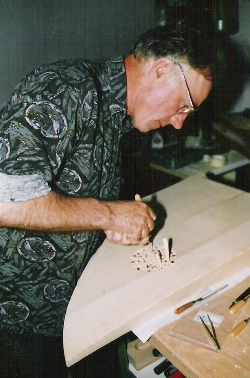 The story of the Veeh-Harfe begins in Gülchsheim with Andreas Veeh, the son of Inge and Hermann Veeh on the farm there. House music has always been played there. Violin, cello and harmonium had a permanent place in everyday family life, especially in the autumn and winter months, of course, when work allowed it. The father soon discovered the musical interest of his son, who was born with trisomy 21.

It is a touching story how Hermann Veeh began looking for an instrument that Andreas could play. Inspired by the possibilities of notation for the historical chord zither, he finally began to develop his own instrument for Andreas, which was tailored to the needs of his son in terms of string spacing and note size.

It took many years. Hermann Veeh worked and experimented tirelessly on many prototypes since 1987. Andreas tested the instruments again and again until the breakthrough finally came in 1992. Shape and sound and playability were just as Hermann Veeh had imagined. The Veeh-Harfe was born.

If you want to learn more about the story with Andreas and the history of the Veeh-Harfe’s impact, the book “Silver look” knows everything to report. It was published in 2012 for the 25th anniversary of the Veeh-Harfe.
In 2019, Hermann Veeh tells an impressive story in the Film contribution from TV Mainfranken about the motives that led him to develop his harp.

The development of the Veeh-Harfe

1987 Beginning of instrument making in the farm’s garage. At the same time development of the corresponding notation and music-making with son Andreas.

1988 First utility model registration by Hermann Veeh.
Cooperation with the University of Bamberg and, due to the demand for instruments, cooperation with workshops for the disabled of the Rummelsberg institutions “Auhof” and the Bamberg community welfare organization. First generation instruments were built there from 1990 onwards.
At the same time, the development continued. Hermann Veeh built instruments himself, improved shape, handling and sound.

1990 Hermann Veeh’s application for entry in the craft register.
After taking a theoretical examination, the entry in the handicrafts register for the plucked instrument making trade was made in 1991, limited to “Veeh-Harfe” and acquisition of the craftsman’s card. Establishment of a workshop in the attic of the apartment building.

1991 Founding of the company “Instrumentenbau Hermann Veeh”.
The typical curved shape of the Veeh-Harfe is created. First design application.

1992 First public appearance with members of today’s Arpeggio ensemble as a test for the instruments. In the years 1992/1993 the shapes and models that are still valid today crystallized.

1993 Start of holding workshops to familiarize yourself with the instruments. Courses on the prefabricated construction of the harps as well as an introduction to creating music sheets and making music together. All family members provide support to the best of their ability.

1994 The first court concert takes place in the barn of the Gülchsheim farm to give the Veeh-Harfe and its players a stage.

1997 This year Hermann Veeh is building 365 instruments as a one-man company and is already exporting instruments to Switzerland. After renovations, the workshop moved to the former stable. Daughter Johanna Veeh-Krauß develops software to rewrite the notes. The first music folders are printed.

1998 “Veeh-Harfe” and the logo are registered nationally and internationally as trademarks. License agreements are signed with the Lebenshilfewerkstätte Bamberg, Wanda Miescher and Ulrich Bucher (until 2008) from Switzerland and in 1999 with the Herzogsägmühle (until 2012), an institution of the Inner Mission Munich.

1999 Last full business year of the sole proprietorship Hermann Veeh. All the important foundations for a small family business have been laid.

2002 The first employee outside the family is hired. The former stable building of the farm is extensively converted for the production and sale of the Veeh-Harfe.

2004 Son Martin Veeh comes into the company and takes responsibility for the manufacture of the instruments. Start of export activities to Japan. “Hermann Veeh” is registered as an EU trademark and in other countries.

2011 Enlargement of the workshop. Relocation of production to the neighboring town of Oellingen. The company’s headquarters remain where the Veeh-Harfe came from: Hermann Veeh’s farm in Gülchsheim.

2012 The Veeh-Harfe celebrates on 23. and June 24th, as part of a festive court concert, celebrates its 25th anniversary.

2014 Official founding of a publishing house for the publication of sheet music for the Veeh-Harfe. Membership in GEMA and in the German Association of Music Publishers.

2015 Hermann Veeh is celebrating his 80th birthday. There are 12 employees working full-time or part-time in the company. New edition of the software Veeh-Noten 4.0.

2017 The Ensemble Arpeggio celebrates its 25th anniversary. On July 12, 2017, Hermann Veeh will be awarded the Bavarian Order of Merit in the Antiquarium of the Munich Residence.

2020 Hermann Veeh died on July 1, 2020 at the age of 85. He leaves behind a great assignment that the Veeh family and the company’s employees are happy to fulfill.